John Wright is the director of the Henson Robinson Zoo. He is a graduate of Truman State University and has worked at various zoos and aquariums as a zookeeper, lead keeper, and general curator.

“I always had an interest about animals and the outdoors. It was just a natural draw and I kind of have a scientific mind so I wanted to know more about them.”

But being in charge of a zoo wasn't always his dream.

“Originally I wanted to be a marine biologist. But being from the Midwest it was hard to find an ocean to do so on a budget to go to school with.”

Wright has very strong priorities towards improving the zoo environment.

Challenges are always faced when having a job, especially through Wright’s perspective.

Wright will be expecting a lot of differences from the zoo in the next five to ten years.

“Increased attendance, a bigger love from the community as far as support goes. In ten years, to actually be an area attraction that is one of the top facilities in the town.”

Wright likes smaller zoos such as the Henson Robinson Zoo compared to the other zoos he has worked at.

“I traditionally like smaller zoos because they are almost what I refer to as more intimate and that we actually get to meet our visitors face to face and that we don't have a million visitors like our zoos to the north and south of us that they rarely ever get to see the director and rarely get to see certain people.”

This has been Arnav Nagrecha for the 2018 NPR Illinois PodCamp. 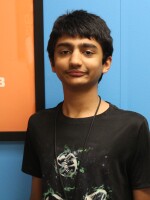 Arnav Nagrecha
Arnav is a 7th grader at Franklin Middle School in Springfield, IL. He is a trumpet player in his school's concert band and is also on his school's Quiz Bowl team and has made several appereances on NAQT. He is also a piano player.
See stories by Arnav Nagrecha
LATEST STORIES
Related Stories