Community Voices: 'Legally Blonde' Brings a Story of Empowerment to the Springfield Muni

This Summer, the Springfield Muni celebrates what Legally Blonde star Zoey Zara calls the "Summer of women" sporting a lineup of shows all with female leads.

"It's interesting, I was talking to the male cast members last night and one of them said 'You know, I don't sing as often as I thought I did." Said Apprentice Director Craig McFarland, "and I was like 'Because this isn't your show'."

"Elle Woods was absolutely who I needed to have in my life at this point." Said Zara, "She's so positive and uplifting and kindhearted and just the type of person who we need more of in this world. It has been really refreshing to get to live in her brain for the last couple months."

Lindsey Rudd, playing Vivianne Kensington, says this show takes the audience through a truly empowering story. One of her character's lines is "Believing in yourself never goes out of style."

"I think about Zoey and I as those five or six-year-old girls watching our stage shows for the first time." Said Rudd, "We could be inspiring the next Elle Woods or the next Vivianne." Rudd says she hopes she can inspire young girls to see what they could be capable of in the future.

For more information about the show and to purchase tickets, visit themuni.org. 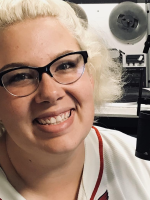