Answering Your Questions About Cannabis Legalization

The issue of marijuana legalization in Illinois has been hotly debated for years. But assumptions, inaccuracies, and unknowns still fuel arguments on all sides across the state. As vocal legalization supporter and governor-elect J.B. Pritzker prepares to take office, Illinois residents are trying to understand how the potential legalization will affect them.

During Illinois Newsroom’s recent event News & Brews: Legalize It?, reporters who have been following the issue offered their insights to a room full of Illinoisans eager to see whether this new market will crop up in 2019 or 2020.

That this was only the beginning of a conversation became clear as the event progressed. In the packed taproom of Riggs Beer Company in Urbana, more than 100 audience questions and comments streamed in via text messages to the event’s producers and panel. Public media reporters Lee Gaines (Illinois Newsroom), Christine Herman (WILL) and Ryan Denham (WGLT) bounced from stat to stat and story to story about the politics, health, criminal justice, and economic implications of legalization in Illinois, laying an important foundation of the topic as many questions still loomed.

What would marijuana legalization mean for Illinois? In the audio of the event below, you hear about the estimated hundreds of millions of dollars in economic opportunity, the threat of federal blowback, the lack of health-related research, the years of racial disparity around marijuana citations and arrests, the concern from a mother of three about the future prevalence of THC-laced gummy bears, and the stacks of cash.

More to discuss? Of course there is more to discuss. In the Q & A portion, host Liz Westfield (WILL) pitches to the panel remaining questions from the audience. Lee Gaines distinguishes between the cannabinoids THC and CBD and discusses the expected rise in hemp farming, Ryan Denham summarizes the tension between state and federal marijuana laws, and Christine Herman clarifies the addictive nature of cannabis.

Illinois Newsroom is committed to hearing what you need to know about the marijuana legalization debate and delivering public media content right to your fingertips. Join our text newsletter on the topic by texting WATCH to 217-394-5765. Every few weeks, we’ll be sending the newest public media reporting via text and calling for comments and questions from you.

Whether you’re for or against legalization in Illinois, the issue will affect everyone in the state. We’ll be watching and reporting and we hope you’ll join us. Text WATCH to 217-394-5765. 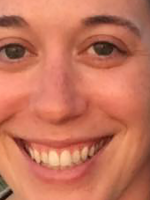 Kristin Walters
As Engagement Strategist, Kristin spearheads the integration of engagement and editorial processes to maximize the reach of our reporting and its positive community impact.
See stories by Kristin Walters
LATEST STORIES
Related Stories