Hello, this is Siri Kakumani for the 2018 NPR Illinois Podcamp.

K-9 officer Jacob Bouldin and his partner in service, Dagz, came in to talk about his occupation and why he wanted to become a K-9 police officer. In his job he and his dog sniff out narcotics and objects including evidence in investigative cases and are located in Chatham, Illinois.

“It’s one of those thoughts that I’ve always wanted to do, my dad was actually a canine handler, he did it for about 6 or 7 years, during that time I was anywhere from 8th grade to a senior in high school, so, I kind of got to grow up around the police dog, I got to help him do tracks, play hides, even, do the bite dog stuff, so, I always knew I wanted to be in law enforcement, and, it was kind of a career goal to end up being a canine handler.”

He also describes how he became Dagz’s partner, and how Dagz became a K-9 Officer.

“Typically, when you get a police dog they come from Belgium, or the Czech Republic, or Germany, where they have deeper lines for these dogs and they import them. Dagz is kind of unique in the sense that he was a rescue so the way he came to us was someone in northern Indiana actually bought Dagz as a puppy and he was going to be a pet.”

He explained earlier how dogs that are chosen for this occupation are ones with drive or dogs that have high energy and are eager to work.

“And remember like I said he’s got extremely high drive, and he just got to be too much for this person to handle. All puppies start out cute and fluffy and they’re friendly and then they quickly grow into dogs. She didn’t have the time to devote to him for his needs, so she turned him over to my friend Brian, a special ops K-9 in northern Indiana. He kind of has an interesting story, because it’s kind of like his second chance.”

Many dogs that are taken to shelters could be taken to the police station instead to be given a chance to start over. It doesn’t matter what type of dog as long as it has the drive.

After that, he took us out to show what they looked like in action.

Next time you think about dropping your dog off at the shelter, consider taking them to the police station instead. This has been Siri Kakumani for the NPR Illinois Podcamp. 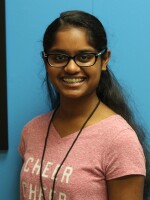 Siri Kakumani
Siri is a student at Springfield High and likes to paint, draw and sing. Her favorite events to report on are events that promote a cause. She is also interested in medicine.
See stories by Siri Kakumani
LATEST STORIES
Related Stories