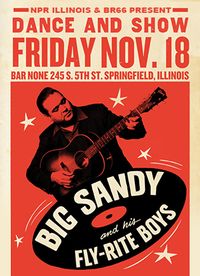 Come out and help celebrate 25 years of Big Sandy & His Fly-Rite Boys. It was over 15 years ago when Robert and the boys first dazzled Springfield with their mastery of rockabilly, western swing, doo-wop and rockin’ soul. Don’t miss this very special occasion, no need to bring a gift. Just get out on the floor and dance the night away!

“Twenty-five years, hundreds of thousands of miles, and over 3,000 live performances; what a dream it’s been!” said Robert “Big Sandy” Williams. “When I first got together for a garage rehearsal with a group of musician friends in the spring of 1988 in Anaheim, California, I never imagined that I would someday be celebrating the silver anniversary of the rocking little band that formed that afternoon.”

Indeed, Big Sandy & His Fly-Rite Boys are beloved by many, with fourteen albums of undiluted joyful music pulled from rockabilly, rock & roll, honky-tonk, rhythm & blues, soul and doo-wop. Just come out and dance your ass off to the world’s pre-eminent ambassador of American roots music.

The obvious thing about Big Sandy & His Fly-Rite Boys is their conviction that the musical world stopped turning in 1957, maybe sooner. But the essential thing about this Anaheim band, one of the real jewels of American roots music, is not how it recaptures the past, but rather how it enriches the instant.
- LA Times