John Miller, President of the University Professionals of Illinois, Local 4100, said the six month spending plan passed by lawmakers and signed by the governor was poorly done and is not even a true budget. And he said it amounts to another cut for higher education.

"It's a failure of the Legislature, which is not willing to stand up to the governor to say, 'We need to fund higher education fully.' So we're now entering our second year without a budget," Miller said during an interview with Tri States Public Radio.

"I don't think anything has changed. All it did was relieve some immediate political pressure so that legislators who were underneath the gun can go back to the district (and ) pat themselves on the back. But really it is a failure. It is an absolute failure to go into our second year without a complete budget."

Miller said the measure prevents public universities from doing any long-term planning and it does not provide funding for the Monetary Award Program (MAP) for the Fall 2016 semester. He called the absence of MAP funding the most egregious aspect of the stop-gap plan.

"MAP grants give students the opportunity to achieve their potential, which benefits all of society. Of all the things that were easy to pass and do, they have failed to pass MAP funding for the upcoming academic year. And I think we will see the damage that this will cause," Miller said.

MAP grants are awarded to Illinois residents who demonstrate a financial need and who attend a public or private college in Illinois. The state failed to fund the program for much of last school year, forcing schools to cover the cost until state money came through. The state reimbursed schools in April 2016 for the Fall 2015 grants, and reimbursements for the Spring 2016 semester were included in the stop-gap measure, which was approved June 30, 2016. 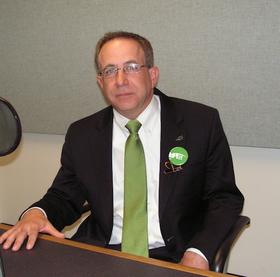 Miller questioned whether a full budget will be approved after the November election. He said Republican Governor Bruce Rauner is holding the state hostage over his pro-business, anti-union Turnaround Agenda, which is opposed by the Democratic-controlled legislature. That stalemate was at the root of the year-long budget impasse that financially hurt colleges and universities.

"The state of Illinois had one of the most amazing higher education systems. And in a very short period of time we managed to seriously damage it," Miller said, pointing to layoffs and furloughs at Western Illinois University and other institutions. He said the state needs to generate more revenue and suggested it implement a surtax on incomes of more than $1 million.

"It (the Illinois Millionaire Tax) passed statewide as an advisory referendum (in November 2014)," said Miller.  However, a proposed constitutional amendment to impose such a surtax fell three votes short in the House this spring.  No Republicans voted in favor of it. Two Democrats also voted against it and a third was absent for the vote.

Miller has served in his current role for about a year.  He's not sure how many UPI members have been laid off in the past year but said the union has grown because it's added new members. He said UPI recently organized tenured and tenure-track faculty at Northern Illinois University.