Nicolas Paz is the owner and chef at AZ-T-CA restaurant in Springfield. He grew up in Bolivia, which is a small South American country and came to America in 2001.

He was in school and needed a job, but he couldn’t find one. But he had always wanted to start a restaurant, so he hired himself!

It would have been difficult to get up the courage not knowing whether you would succeed. It would be so hard to take that risk, knowing that if you failed you would be just back where you started.

The restaurant is mainly Mexican food, with some South American mixed in along with others. His experiences along with his cultural food, combine to make a unique menu with food from almost everywhere.

He came from a poor family, in Bolivia, and that is his motivation. He wants to do better than his parents did, so his kids can do better than him. He wanted to get out of the situation he was in and he did. Doing that was a challenge, but he managed perfectly. He built an entire career, and entire life out of almost nothing.

"I think it is the American dream to achieve what I have achieved. I think it’s with discipline, a lot of hard work, it’s something that’s is possible, you know, a lot of people, this point, they don’t believe in it anymore. But if I’m from Bolivia and I can come and pursue a dream, you know, make it real, discipline, hard work, continue to believe in your dreams - it is achievable for anybody."

I think he is correct in that statement. He started at the bottom and got to the top, and that really is the American dream. 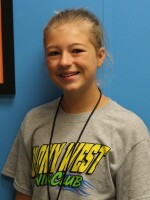 Molly Tolsdorf
Molly is an eighth grader at Franklin Middle School. She plays flute in band and is a swimmer on the SPY Typhoons. She also thinks that it would be helpful to have her bio written by someone else.
See stories by Molly Tolsdorf
LATEST STORIES
Related Stories