School is canceled Thursday for 6,000 students in East St. Louis as teachers walk the picket line. About 400 union teachers and staff members went on strike at 7 a.m. 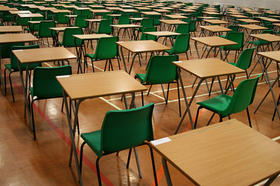 After three years of salary freezes, the East St. Louis school district is offering its 400 teachers an average 2.6 percent salary increase for the next three years. The contract also doubles the length of time it takes for a teacher to reach the salary schedule’s top pay tier. Hawkins said it’s the best the district can offer.

But Dave Comerford of the Illinois Federation of teachers said Wednesday the contract actually cuts salaries in the long run.

“We basically equate that to a career-long pay decrease. That will be less take-home pay over the next 20 years,” Comerford said.

Comerford said East St. Louis teachers remain determined to strike until the district goes back to the bargaining table and agrees to a salary schedule that looks closer to the one they have now.

Hawkins said the district has no plans to renegotiate at this time.