State higher education funding per full time student has dropped more than 26 percent in Missouri and increased almost 50 percent in Illinois over the past five years, according to data compiled by the State Higher Education Executive Officers Association. 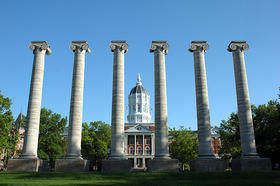 “When you extract the pension funding from the Illinois report, what you see is we are in the bottom half of the country in terms of state support for our universities and community colleges,” Applegate said.

According to Applegate, if Illinois’ higher education receives the 31 percent budget cut proposed by Governor Rauner, then Illinois would be ranked 6th from the bottom in state support.

Illinois is an anomaly in the State Higher Education Executive Officer’s Association report due to the pension funding. Missouri, on the other hand, follows national trends.

“It looks like Missouri has been impacted by the economic downturn at a higher level than the national average,” said Andrew Carlson, the report’s principal analyst. “And then if you just look at the actual dollar amounts … Missouri is about 20 percent below or 15 percent under the national average on per student funding.”

If the pension funding is taken out of the equation, both Missouri and Illinois have had relatively flat funding over the past six years. But because enrollment has increased in Missouri, there’s less money dedicated to each student.

“We currently, for example, export more than 16,000 more students out of Illinois to go to college than we import from other states to come in to college,” Applegate said, noting that many of those students go to Missouri.

Applegate is lobbying for an increase in state funding instead of the decrease Illinois Governor Bruce Rauner wants in order stop what he calls a “talent drain.”

Meanwhile, Missouri has kept tuition to state schools flat due to legislative constraints. But the University of Missouri System approved a slight tuition hike in February. And state appropriations continue to be historically low for Missouri.