At 6 foot 5 inches, Ian Winterbauer is a tall man. And a witty one too - his poems posted online are often accompanied by the hashtag #tallestpoetonearth. He dresses conventionally - usually in a flannel shirt and jeans. He has golden blonde hair and hip, clear frame glasses.

While he might not appear so to the average passerby, the 27-year-old also has a streak of eclecticism. He collects and studies the esoteric mythology of crystals and bones. He has a thing for Bigfoot. His heroes are apparent if his sleeves are rolled up and you get a good look. One of them is of the late comedian Andy Kaufman, known for his awkward, sometimes absurdist style that challenged social mores. Another tattoo features a sort of hieroglyphic-type language invented by Springfield native and poet Vachel Lindsay.

View a video tour of the Lindsay home, plus an interview with Winterbauer, below:

Winterbauer grew up in Petersburg and now lives just blocks away from the Lindsay home in Springfield. His love for Lindsay runs in the family; his sister has her own tattoo featuring a well-known image of the poet, designer and illustrator throwing an arm in the air during a recitation. Winterbauer’s dad, John, started giving tours of the home, at 603 South Fifth St. - next to the Governor’s Mansion, when Winterbauer was a kid. It was home to the young Lindsay, his parents and sisters, and he later returned to live there with his wife and own children. “I was 11 the first time I ever came to this house … It’s been like 15 years that I’ve dedicated to Vachel Lindsay. I just developed this sort of brotherly love,” says Winterbauer. He is on the board of the Vachel Lindsay Association and volunteers there, giving tours around the home. His dad is still at it as well. One of the first things Ian makes clear to guests is that while Lindsay is known for his poetry, there’s much more to him. “He was a brilliant illustrator, he was sort of an architect … Basically if Vachel saw something that needed improved in the world, he set out to improve it in his own certain way.”

Lindsay’s father was also ahead of his time. He was a doctor who believed in the germ theory before it was commonly accepted, and he tended to people of color who were harmed during the 1908 race riots at no cost to them, knowing it could have dangerous repercussions. Vachel Lindsay would later go on to write a poem called “The Congo." Today, some scholars construe it as racist, while others say the work was indicative of similar pieces at the time - that Lindsay was clearly, though understandably, out of touch with the realities of Africa. It does appear that in certain ways, Lindsay thought he was doing his part to better race relations. He is often credited with “discovering” the black poet and esteemed Harlem Renaissance figure, Langston Hughes, and helping him find publishers for his early works. It’s just a small part of a complicated story. Vachel was part of many of those.

Those with a basic knowledge of Lindsay, who was born in 1879 and died in 1931, likely have heard that his death was a suicide at the family’s Springfield home. It’s said he drank a bottle of Lysol after falling into a depression. However, Winterbauer doesn’t like to talk about it. He prefers to focus on Lindsay’s life’s work. “Vachel spent his entire life believing that Springfield was this paradise - that Springfield had what it took to improve itself,” says Winterbauer. Lindsay’s The Golden Book of Springfield imagines the city in 2018 as a utopian paradise. Winterbauer says the poet believed local communities should first focus on themselves before looking outward; if each community were to take care of its own people, there would be fewer problems overall.

Lindsay is often painted as a troubadour, roving the plains, prairies and cities in the U.S. and telling the stories he discovered along the way. Winterbauer says some of his favorite works by Lindsay are his travel writings. “These books depict the America that goes too often unnoticed - the kind, hardworking, totally normal or average people who are happy to help a person in need. They also show how much Vachel truly loved the idea of community and what he thought it could be while still managing to be humorous and witty.” These works, collected in a single volume called Tramping Across America, provide meaningful insight into the poet’s psyche, Winterbauer says. “Vachel's travel writings depict him better than anything else he wrote - as a wandering visionary who writes poems for and about the trees, birds, people, and unused country roads of America.”

While home in Springfield, Winterbauer says Vachel would have his illustrations and poems printed up on his father’s dime, and hand them out to passersby. Winterbauer adopted a similar style in order to get his own work out into the world. He’s inserted his printed poems into local arts and culture magazines, including some in California and others in the Illinois Times in Springfield. “Vachel instilled in me a desire to depict America as I see it from my own point of view. The actual content is different, obviously.” Winterbauer’s book of poems, Scream As You Leave, was published and nationally distributed earlier this year. One poem in it titled 'Sketches of the Midwest' contains his own observational snapshots from the Heartland. Winterbauer thinks other local artists could also find new inspiration by studying Lindsay further.

The Illinois Times named Winterbauer the “Best Homegrown Scholar,” a staff pick in this year’s “Best Of” edition. Given his intimate knowledge of Lindsay - a lifetime in the making - and his desire to preserve and protect his legacy, it seems well won. Winterbauer continues to seek out remnants of Lindsay's life and preserve them. The relationship between the dead and living poets clearly runs deep.

“My wife and I got married right down the hill from Vachel's grave out at Oak Ridge Cemetery. People always get so freaked out when I tell them that but it's a beautiful place. The cemetery was designed to be a place to hang out.” Like Lindsay, Winterbauer defies modern conventions. His art isn’t made to appease the masses, but instead express unique and sometimes challenging ideas. Both Winterbauer and Lindsay have hoped Springfield will one day rise to the potential they see within it.

You can tour the Vachel Lindsay Home in Springfield on Saturdays & Sundays between the hours of 2-4, or by appointment. More information, here. 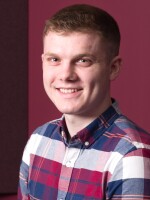 Carter Staley
Carter was the digital engagement producer at NPR Illinois 2017-2018. He graduated from the Capital Scholars Honors with a bachelors degree in communications from the University of Illinois at Springfield.
See stories by Carter Staley