WIU Board to Delay Decision on Budget Cuts

The Western Illinois University Board of Trustees will wait until next month to vote on a massive budget cutting plan.  In a letter issued Tuesday to the campus community, WIU President Jack Thomas said he wants more time to come up with a proposal that threatens the livelihood of fewer people.

“When I look at the personnel, it almost brings tears to my eyes to look at what we’re having to do here,” Dr. Thomas said in an interview with Tri States Public Radio.

“We are a family. We are a community. I think the mayor said it best: So goes Western, so goes Macomb.” 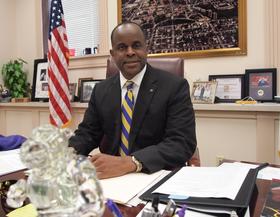 The budget-cutting proposal announced last week would have eliminated around 50 faculty positions.  Administrative and support staff positions were also targeted for either elimination or restructuring.

Thomas said he hopes to work with employee unions and other employee groups to come up with a better plan.  But he cautioned the university still must reduce spending by $7 million to $11 million for the fiscal year that begins July 1, 2016.

Russ Morgan, Interim Associate Provost, said faculty and staff salaries are not playing a role in determining which positions to eliminate.

“What we’re looking at is enrollment in different departments.  We’re past doing across-the-board cuts. We’re making cuts where enrollments are down and where we’re overstaffed at this point,” Morgan said.

The BoT is expected to hold a special meeting January 12, 2016 to consider the revised budget reduction plan.  Thomas and Morgan said that date was chosen because some teachers must receive lay-off notices by January 15, 2016, as per the faculty contract.  The administrators said they’re willing to extend that deadline and offered that proposal to the University Professionals of Illinois, which represents faculty members and some other employees.

Thomas said members of his leadership team will take pay cuts beginning January 1, 2016, though he did not know how many administrators agreed to the plan or how much money it would save.

Thomas also said state funding for higher education has dwindled for more than a decade. In addition, the  university is also contending with a decline in its enrollment.