The state of Illinois has cut funding to higher education each year for more than a decade.  Those cuts combined with declining enrollment will cause some people to lose their jobs at Western Illinois University.

“At this point I anticipate that it will be necessary to inform approximately 50 faculty of the elimination of their positions,” said Kathy Neumann, Interim Provost and Academic Vice President during a budget address delivered Tuesday by university administrators.

“Additionally, several administrative positions and support staff positions will either be eliminated or have modifications made to their contracts.”

The cuts will take effect next fiscal year, which begins July 1, 2016.

WIU administrators estimate their plan will save the school around $7.5 million. But that’s not enough – they’re still looking for an additional $4 million in savings. 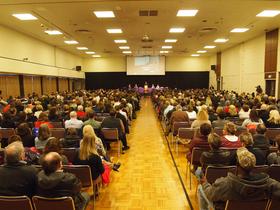 “We’re looking at possible furloughs and maybe a reduction in wages and those kinds of things. But those are the kinds of things that have to be bargained before we actually really go into that,” President Jack Thomas told reporters after the budget address.

Program cuts are also a possibility, though Dr. Thomas declined to say which ones might be on the chopping block. He said a task force led by Neumann will come up with a plan to eliminate, merge, and/or restructure programs.

“This is difficult for all of us,” Thomas said. “That’s the reason we called everybody together, so that they could hear at one time what we have to say about our university.”

Western and other public universities have not received any state money for more than five months. Thomas urged people to lobby the governor and state lawmakers to approve a budget.

Leaders of the University Professionals of Illinois Local 4100, which represents WIU faculty, said they were not involved with the administration’s budget cutting plan.  Chapter President Bill Thompson called the elimination of jobs “a tragedy” and said the union will scrutinize the plan to ensure the administration is not violating UPI’s contract with WIU.

“We’re going to be keeping a very close eye on the process. We’re going to be doing everything we can, of course, to keep people employed. Unions don’t exist to let people lose their jobs. And we will make sure the administration is abiding by the contract,” Thompson said.

UPI Chapter Vice President Molly Homer said the union represents around 650 faculty members, so the elimination of 50 positions is a sizeable cut for the school.

“And it’s a hit to the community too because 50 people is a lot of people in the Macomb community. And all their families as well,” Homer said.