Sister Thea Bowman Catholic School in East St. Louis is one of hundreds of private schools in Illinois that could see a financial boost from the state’s new tax credit scholarship program.

More than 90 percent of the families who send their children to the school fall below the federal poverty line of $24,600 for a family of four. That gives them top priority to receive a scholarship.

Although children from low-income families get priority,  if Illinois follows the pattern of other states with similar programs, most of the tax credit scholarships will go to middle-class families.

Dan Nickerson, the principal of Sister Thea Bowman, is hoping the tuition subsidy will put his school on firmer financial footing.

“It’s difficult for us. We have been in the black for the last two years, but for several years before that we were running at a deficit,” Nickerson said.

About 80 percent of his school’s funding comes from grants and donors, who will be able to get a lower tax bill if they give money for the scholarships.

“Since I’ve been principal, we’ve never turned anybody away for financial reasons,” Nickerson said. “We always try to find a way to make it work if they want their student to go here and we feel that they’re a good fit.

Illinois’ became the 18th state with a tax credit scholarship program last month as part of a compromise to pass a K-12 school funding bill.

Unlike school vouchers, which provide families with state money to pay for private schools, tax credit scholarships are distributed by nonprofit groups.

Funding for the scholarships comes from money that would otherwise be paid to the state.The scholarships are funded by people and corporations who receive a 75 percent reduction on their state income tax.

That allows families to more easily use the scholarships at religious schools. Most states, including Illinois, bar public money from going to religious institutions. 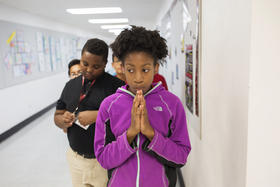 Opponents of tax credit scholarships, like the Illinois School Board Association, view them as public money despite the workaround.

“This is designed to be state, public monies, going to some taxpayer because of tuition paid to a private school,” Ben Schwarm, the association’s deputy executive director, said. “We just think that’s worrisome.”

“That’s certainly going to drain revenue and resources which could have been going to public schools,” he added.

Donors are supposed to start receiving tax credits in January, but even the Department of Revenue, the agency tasked with implementing the scholarship, doesn’t know exactly how the scholarship program will work.

When asked who would distribute the private school aid, and in what school year families could start using the scholarship, a department spokesman said that would be decided in the coming months.

Under the law, up to $75 million in tax credits can be distributed to people and corporations who contribute to the scholarship funds each year.

“Public schools have been cut and pro-rated for really eight years in a row, and we’re fighting for every dollar,” Schwarm said. “And that direct funnel now from what could be going to public schools, going now generally to private schools, is going to be a problem.”

Supporters of the program, meanwhile, would like to see more money put into it.

“It’s a drop in the bucket,” Jason Bedrick, policy director at research and advocacy group, EdChoice said. “It’s probably only going to provide scholarships for ... about half of one percent of the total student population in Illinois.”

The cap on tax credits puts a limit on the number of students who will be able to receive a scholarship: anywhere from 5,000 to 25,000 students depending on their families' incomes.

Bedrick would like to see the program expand so all families who want their children to attend a private school can receive a scholarship, not just families who make less than 300 percent of the federal poverty line. For a family of four, that’s about $74,000. Once a family has received a scholarship their income can rise to $98,000 without losing eligibility. 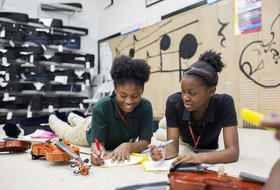 “Ultimately we believe that these programs should serve all kids, but if we’re going to phase in a program and there’s a limited number of seats, it makes sense as a matter of fairness that the students who are most in need would have access first, Bedrick said.

“The problem with that is that if you only have a small number of students participating, all you’re going to do is fill empty seats at existing schools. If you want to create a more dynamic and innovative system than you really need to have everybody involved.”

Many of the other 17 states with tax credit scholarships also have a cap on family income. In Florida, for example, a family of four must make less than $64,000.

Luis Huerta, Columbia University education policy professor, said middle-class families are the primary beneficiaries of the scholarships in those states.

“We can predict, given tuition prices, and given that this is a scholarship that will only pay for partial tuition, that families that are more mobile and on the upper part of the income threshold will be the ones who take up the scholarship,” Huerta said.

Low-income families will be able to receive a scholarship up to about $12,000, which would cover full tuition at most Catholic schools in Illinois. Tuition is about $4,000 a year at elementary schools in the Belleville diocese, partly because the local parishes contribute to their school’s budget.

According to EdChoice, the average tax credit scholarship in other states range from $1,600 to $6,500.

While many of the other 17 states with tax credit scholarships restrict eligibility to children who previously attended a public school or who are entering kindergarten, Illinois allows all students to apply, as long as their families fall below the income threshold.

The 30 catholic schools in the Belleville Diocese, including Sister Thea Bowman, plan to take advantage of that eligibility.

Tom Posnanski, director of education at the diocese, hopes the tax credit scholarships will help keep families enrolled at parish schools through eighth grade. That could keep them from moving away or enrolling in public schools.

“Hopefully it will be assistance to the families who already send their children to Catholic schools. And one would hope that at some point it would lead to more potential students,” Posnanski said, adding that enrollment has declined in the diocese schools in recent years. “I hope it stabilizes enrollment in most of our schools, if not increase it somewhat, not a lot.”

Most other scholarship programs also started small like the one in Illinois. Typically, they expand over time, Huerta said, raising the cap on the amount of money that can be donated and reducing eligibility restrictions.

However, Huerta said expansion is less likely in Illinois because it has a five-year sunset clause. If lawmakers don’t revisit it, the program will dissolve in 2023.