color:#333333">Illinois’ taxing model for wind energy companies is touted as one of the best in the country, bringing in $30.4 million in property taxes in 2016, according to economic experts.

Barton DeLacy, a tax expert from Chicago, said that the Illinois system is a good model that is very close to the value he gives to wind farms and is much more consistent than in other states.

“Ironically, the one area where Illinois actually got their act together and legislated a solution was regarding the taxation of wind farms,” said DeLacy, who said that much of the rest of the country uses a “patchwork” system.

color:#333333">Up until then, wind farms were assessed on a county-by-county basis leading to a system where schools were not being able to predict how much revenue they would receive from the taxes and companies being uncertain on how much they would have to pay each year.

In 2007, the legislature decided instead to establish a consistent value of wind farms anywhere Illinois by assessing wind turbines at $360,000 per megawatt hour of generating capacity.

color:#333333">Thus, taxing bodies could still assess at local rates, yet companies wouldn't have to worry about a change in value from location to location.

However, the wind farms had a steep depreciation schedule, reducing from the $360,000 assessment by 4 percentage points each year (96 percent in the second year, 92 in the third, 88 in the fourth and so on) until they reached a floor of 30 percent of the original assessed value. The value of the land the turbines are located on is still determined by local assessors. 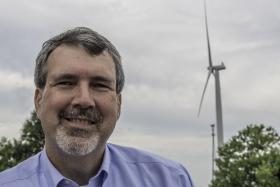 Guy Gradert, the superintendent of the school district, said that the extra money allowed the rural district to survive the recession without being affected by the economic downturn. Despite the turbines' steep depreciation schedule, the school was able to use the money for capital projects and to pay down debt, he said.

Jon Kilgore, the superintendent of the Pontiac School District, another rural district in central Illinois with many wind farms, said the extra revenue helped the district keep up with its capital investments, including infrastructure.

“Although circumstances vary widely from county to county and district to district, the overwhelming evidence supports the conclusion that wind farms benefit school districts financially,” Loomis said. “General state aid will be reduced in most cases as a result of increased tax revenue, but the net revenue stream will be positive. In fact, in most cases the impact is a very large increase in revenue.”

This reporting project was a collaboration between Flatland, the digital magazine of Kansas City PBS, and the Midwest Center for Investigative Reporting, an independent, nonprofit newsroom covering agribusiness and related issues. Read the main piece in the series, which looks at Kansas school districts, here.

The SJ-R's Tim Landis talks about the Logan County wind farm proposal, gives us an update on demolition around Springfield and a Springfield based company is growing.