Shirley isn’t familiar with the concept of personal space.

The 80-pound Alpine milking goat wanders around the yoga class, closely inspecting the other participants and occasionally stepping on a stray finger.

“I guess Shirley is going to help me demonstrate this next pose,” said instructor Alicia Davis, as the goat parks herself at the front of the class.

Farmers Alicia and Josh Davis began offering goat yoga classes last spring as a way to help draw more attention to their small organic farm in Pocahontas, Illinois. Since then, the classes have become surprisingly popular, with some selling out weeks in advance.

During a Saturday morning yoga class, 20 participants lay out their yoga mats in a sun-dappled pen filled with goats.

Before the session begins, however, a mischievous goat named Sparkle has left a pile of “goat pebbles” on one of the yoga mats.

Josh Davis jumps into action, sweeping the droppings off the mat. As one-half of the goat yoga duo, he tends to the herd while Alicia Davis leads the classes. 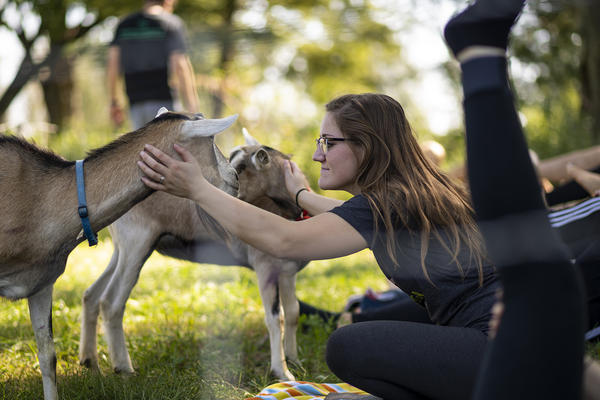 In addition to dung removal, his main duties include breaking up headbutting contests and redistributing the goats if they cluster in a specific area of the pen.

“Sometimes the goats will congregate around a certain person that has perfume or lotion on,” Davis said. “We haven’t figured out what that goat lure is.”

The herd roams the pen during the yoga classes, nibbling on tufts of grass. Occasionally, to the students’ delight, one will plop down on a mat for a nap.

“It’s very interactive, because the goats are not shy,” said St. Louis resident and first-time goat yoga participant Erica Sparks. “You have to be able to let go of a certain amount of control because you don’t really know what’s going to happen.”

Halfway through the class, a black and white spotted dwarf named Bucky starts nosing around in a purse while its owner holds a downward-facing dog position. 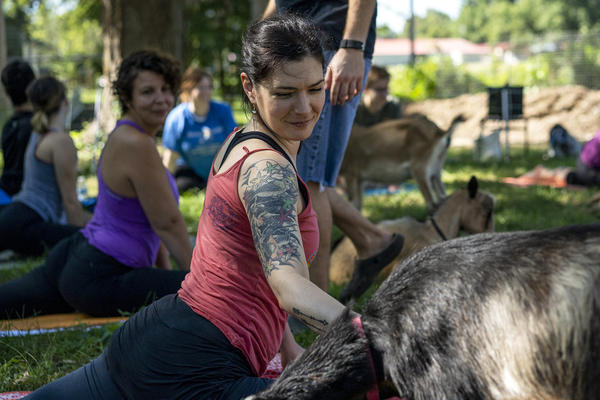 The classes help draw more people to Green Finned Hippy Farm, a small organic operation tucked away in south central Illinois, about 45 miles northeast of St. Louis. A side benefit, said Josh Davis, is that the goats also become more comfortable with people and are easier to manage on the farm.

“Goats are not naturally this sociable,” Davis said. “They’re not wanting to be hugged and loved on. We want that relationship with our animals because it’s a lot easier to work with them.”

Megan Conover, a self-described “goat fanatic” from Imperial, Missouri, came to goat yoga with her friend Tammy Belcher, who lives in Belleville.

“I’m having goats at my wedding,” Conover said. “They’re bringing the rings down the aisle, so they’re our ‘goat-bearers.’ They’re not potty-trained at all, but it’s so much fun to have them around.”’

The goat yoga classes will continue through the end of October, although the Davises say they may add additional classes in November depending on interest.