When Martha Wade spells a word, it sounds like a song.

Her daughter, Sharon Wade, sits with her on a plush couch and tries to come up with new words to stump the 86-year-old. As her mother’s full-time caregiver, Wade looks for activities to challenge her physically and mentally.

Sharon Wade’s situation is not unusual. Unlike previous generations, an increasing number of older Americans are choosing to continue living in their own homes, rather than moving to nursing facilities. Meanwhile, the high cost of in-home care means that the burden of caring for elderly adults often falls on family members.

Listen
Listening...
/
Experts say the face of eldercare is changing, as more older adults choose to 'age in place' in their own homes and rely on family members to help offset the cost of care.

“I’m kind of overprotective of her,” said Wade, who lives with her mother in Dellwood. “Even when she has hospital stays, they’ll let me stay all night with her.”

Since retiring from her job at a bank last fall, Wade has been responsible for all aspects of care for her mother, who is physically disabled and has dementia. Being the sole caregiver can be challenging, she said, especially when she’s having trouble communicating with her mother.

“Sometimes I can’t understand what she’s trying to tell me and I’m just going on my own intuition,” Wade said. “I just pray a lot, hoping I’m doing what she needs to be done.” 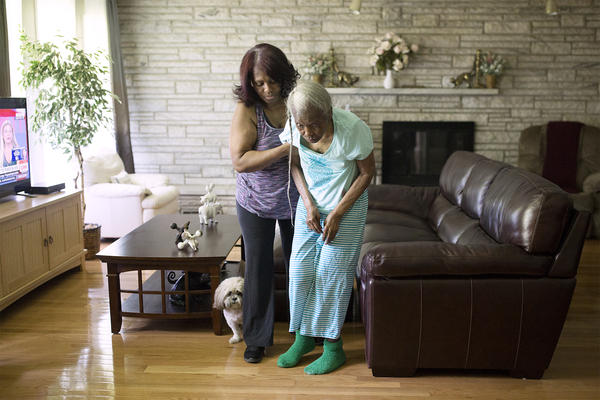 Experts say the need for informal caregivers will likely rise over the next decade, as the youngest baby boomers turn 65. The U.S. Census Bureau estimates the 65-and-older population will reach 73 million by 2030, with about 1.8 million people joining its ranks each year.

“The tsunami of aging is not coming; it is in fact upon us,” said Marla Berg-Weger, Saint Louis University professor of social work and director of the SLU Geriatric Education Center.

Not only are there more older adults to care for, improved biomedical technology is allowing people to live longer lives. Across both sexes, life expectancies in the U.S. have risen by nearly six years since 1950.

“We don't necessarily want to age like our parents and grandparents did,” she said. “We see ourselves living in our own homes or possibly in retirement communities, but certainly not in skilled care.”

According to a national survey by the insurance provider Genworth Financial, the median annual cost of a home health aide in the U.S. in 2017 was $49,192, slightly above the annual cost in Missouri of $48,048. For a private room in a nursing home, the annual median cost jumped to $97,455 nationally and $65,700 in Missouri.

Although Medicare may cover a portion of these expenses, many older Americans rely on unpaid help from friends and family members to help offset the cost. The Bureau of Labor Statistics estimates more than 41 million people provided unpaid elder care to someone age 65 or older in 2015 to 2016.

In many cases, the responsibility of caring for an elderly relative falls on one person, usually a daughter. These primary caregivers often have trouble caring for themselves, Berg-Weger said.

“They may let hobbies go, they may let exercise go, they may let their nutrition go,” she said. “It’s not unheard of that the caregiver becomes ill or even dies before the person that they’re caring for, because they’ve ignored and just tried to power through their own health issues.”

‘I don’t want anyone to say thank you to me’

University City resident Susie Fredman became a caregiver overnight for her father-in-law, Aaron Fredman, after her mother-in-law died 12 years ago.

“Basically, he lost the love of his life,” said Fredman. “[He] was just lost and still is.”

Her father-in-law lives across the street and has mild to moderate dementia. About a year ago, his family decided to hire full-time caregivers after the 88-year-old fell while alone in his home.

Although Susie Fredman is thankful for the help, she said there are many household tasks that fall to her. After her mother-in-law's death, Fredman took on the responsibility of preparing her father-in-law’s meals and managing his health care. Her husband works full-time as a cardiologist at Mercy Hospital and St. Luke's Missouri Baptist Medical Center.

As Aaron Fredman’s dementia has progressed, Susie Fredman’s needs have often taken a backseat. Going to an exercise class or taking her dog for a walk can sometimes feel like one more thing on a long to-do list.

“I don’t want anyone to say thank you to me. I just want someone to share the experiences of what I'm doing for him and with him,” she said. “I love him, but it's a very lonely experience.”

‘You’re not the only person experiencing this’

Their goal, according to program director Jill Cigliana, is to help keep the elderly adult in their own home, while reducing stress for family members.

“Many families feel a real commitment and obligation to provide care at home,” Cigliana said. “It’s usually a place of rich connection with community and a place where people feel they’re able to maintain their dignity and sense of self.”

The organization pairs each family with an occupational therapist and social worker who help them develop hands-on strategies for managing the complex symptoms of dementia. Through a series of home visits, staff members identify issues and suggest possible solutions.

Cigliana said they work with caregivers to help them understand that what they’re experiencing is typical for dementia.

“We get to come along and say, ‘I know this feels crazy to you, but these are normal dementia symptoms,’” she said. “You’re not the only person experiencing this, this is actually the most common problem that we see.” 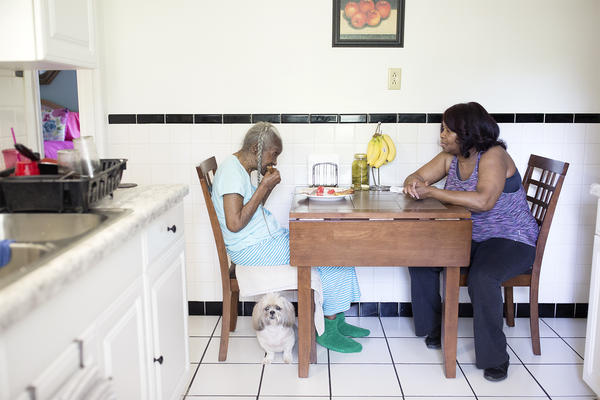 Sharon Wade has been receiving help from Memory Care Home Solutions for the past several months. A few weeks ago, Wade said her occupational therapist brought her a special alarm that wakes her up if her mom gets out of bed in the middle of the night.

On a recent afternoon, the pair sat together after lunch and thumbed through the stack of baby photos. Martha Wade’s laughter echoed in the small kitchen as her daughter held up each one.

When it comes to caring for her mom, Wade said there are good days and bad days, but she feels this is what she’s meant to be doing.

“I just want her to try to enjoy her life as best she can,” she said. “Anything that makes her happy, it makes me happy.”