Beyond Money, Which Democrat Has Best Chance To Unseat Rodney Davis?

Labor Day is typically seen as a turning point in an election year, the time when regular voters start paying attention. But for the 2018 election—still more than a year away—that adage about Labor Day may need to be updated.

Five Democrats have already announced plans to run in the March primary for the 13th Congressional District. Incumbent Rep. Rodney Davis, R-Taylorville, has held the seat since 2013, but he’s seen as potentially vulnerable in a sprawling district drawn specifically to give Democrats a shot.

“In the right election, with the right candidate, it’s a competitive district,” said Kent Redfield, a political scientist at the University of Illinois. “This is not a suicide mission, taking one for the team, like it would be running as a Democrat against (Reps. Darin) LaHood or (John) Shimkus.”

So how can you tell if it’s the “right election, with the right candidate”? That’s exactly what national Democrats and Republicans are trying to figure out. If any of the five Democrats emerge as a serious threat to Davis, expect both sides to begin investing big money in the race—TV ads, staff, and more.

The five Democrats who’ve announced so far include:

Whoever wins the March primary will face a seasoned fundraiser in Davis.

Those top PAC contributors included Deere & Company PAC, McDonald’s Corp. PAC, the Caterpillar Employee PAC, the State Farm Federal PAC, and several others. Davis also raised more than $641,000 from individual contributors, including many top donors from within the district.

Davis has also avoided major controversy in his time in office, though he has faced criticism in recent months for his support of repealing and replacing Obamacare, which he says is “collapsing.” The Cook Political Report currently rates the 13th District as “Likely Republican” in 2018.

The National Republican Congressional Committee is expected to wait and see whether a viable Democrat emerges before deciding how much of an investment to make in the district.

The Democratic Party is in “chaos” nationally and that’s trickling down to races like the 13th District, said NRCC spokesperson Maddie Anderson, noting the five candidates—and no clear front-runner—in the race. State Rep. Carol Ammons, D-Urbana, flirted with a run but later dropped out.

“The Democratic primary (in the 13th) is a prime example of that kind of chaos,” said NRCC Anderson. “This isn’t to mention the millions of dollars that Nancy Pelosi and the DCCC have spent in previous failed attempts to take the district from Rodney Davis, who is a common-sense Republican who represents his constituents very well.”

The Democratic Congressional Campaign Committee will also let the individual campaigns “play out” before making decisions about whether to invest a significant amount of money in the race, said DCCC spokesperson Rachel Irwin. The DCCC is looking at 80 districts as potential winners in 2018, including the 13th. Looking at that expanded battlefield, Democrats need 24 seats to re-take the House majority in 2018.

“We’re excited and enthused by the candidates stepping up to run in this district,” Irwin said. “Our primary focus this early in the cycle is ensuring we’re holding Republicans accountable for their votes in Washington.” 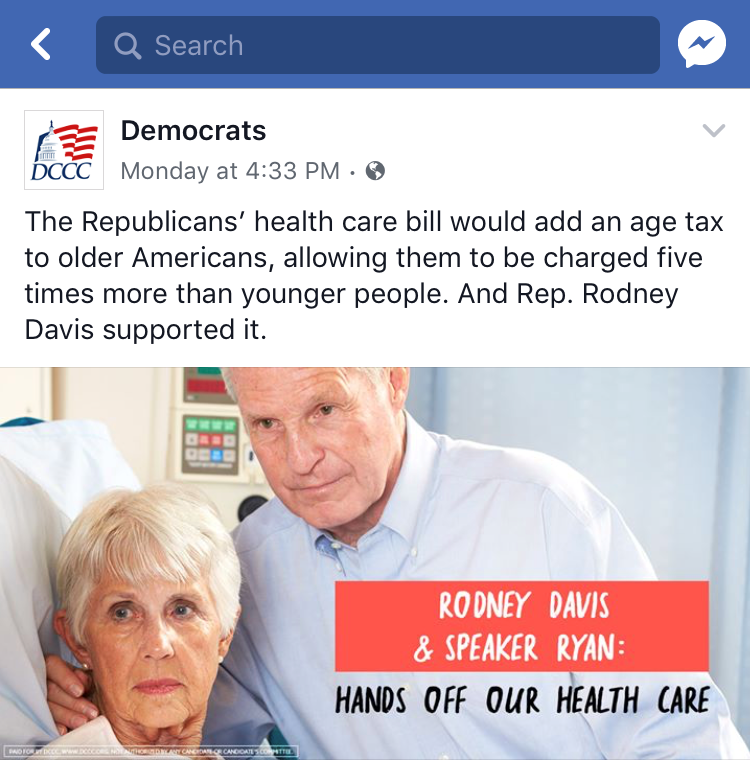 That means smaller campaigns like Facebook ads, which are already running in the 13th District reminding voters of Davis’ support for repealing and replacing Obamacare, Irwin said.

The 13th District was drawn specifically by Democrats to give Democrats a chance at winning in the right election with the right candidate. President Barack Obama only narrowly lost the Republican-leaning district in 2012 to Republican Mitt Romney. President Donald Trump widened that gap in 2016 when he beat Democrat Hillary Clinton in the district with 49.7 percent of the vote.

But midterm elections are notoriously difficult for the party in power; Obama’s Democrats suffered massive defeats at the national and state levels in 2010, in the wake of the Affordable Care Act vote. Trump’s unpopularity could also hurt Republicans like Davis.

The Davis campaign notes that he's considered one of the most bipartisan members of Congress by the Lugar Center, ranked No. 23 overall out of 427 House members. That bipartisan record is one reason why Davis' margins of victory have grown since his original 2012 election, said spokesperson Ashley Phelps.

"Rodney has always been a common-sense member who will work with anyone, no matter their party, to get things done for the 13th District," Phelps said. "We're a long way off from the 2018 general election and we'll have to see who is successful in this very crowded primary. In the meantime, Rodney is focused on legislating."

Davis also isn't backing off his position on Obamacare. Insurance options have dropped to just one or two for all 14 counties in the 13th District, and Medicaid is on an unsustainable path in Illinois, Phelps said.

"If Democrats have a solution, then they should put them forward. Rodney has always said he work with anyone to repeal, replace, fix, or do whatever necessary to help those struggling under Obamacare," Phelps said.

The gerrymandered, sprawling 13th District includes parts or all of 14 counties, stretching from the western half of Bloomington-Normal all the way south to Edwardsville. While the district includes many Republican-leaning areas, it also includes Democratic pockets like college campuses.

“It’s kind of a strange district,” said Redfield. “There is an education community component to the district.”

Money won’t be the only factor in determining Democratic chances in the 13th District. In 2014, the well-funded Democratic candidate was Ann Callis, a former judge from southern Illinois. She raised and spent nearly $2 million to unseat Davis, but lost with just 41.3 percent of the vote.

By contrast, the Democratic candidate in 2016 was Mark Wicklund, a former Macon County Board member who was not supported by national Democrats. He raised and spent less than $50,000 but still managed to pick up roughly the same share of the vote as Callis—40.3 percent.

Wicklund was frustrated by the lack of support from the DCCC and other influential Democratic groups. He said he found himself fighting not only his Republican opponent, but Democrats too.

Ultimately, he said, the best way to prove you’re a viable candidate to win is to work hard right now—attending parades and other community events, all over the district. His advice to the five Democrats in the race? Run everywhere, even Davis’ home of Christian County.

“Face to face in the 13th District makes a huge difference, because (voters) get a feel for you and what kind of person you are. And that’s why I did as well as Ann Callis on a heckuva lot leaner budget than she did,” said Wicklund. “It’s just proving who you are to your voters that makes the biggest difference.”

We're here at the IL13 candidates forum. It's refreshing to hear from candidates interested in meaningful dialogue with all constituents. pic.twitter.com/vPr68epNhH— CU Indivisible (@CU_Indivisible) September 5, 2017

Gill is another Democrat with a complicated history with the DCCC. Gill has run for—and come up short—in the 13th District or its pre-redistricting predecessor five different times, most recently in 2016. But Gill gave Davis his biggest scare in 2012, when Gill lost by around 1,000 votes—one of the closest races in the country that year.

In 2018, national Democrats are “not with me and are actively working against me,” Gill said.

“At the end of the day, that’s fine. Part of my message is about needing to stand up against this corporate ownership of our politics and government. The DCCC takes all kinds of corporate money,” Gill said. “I get it, but it’s a shame. But it speaks to the schism within my party that we saw laid wide open in the Hillary vs. Bernie of 2016, and the battle over the DNC chairmanship a few months ago.

“The 13th District is a microcosm of that schism, I believe,” Gill said.

WGLT depends on financial support from users to bring you stories and interviews like this one. As someone who values experienced, knowledgeable, and award-winning journalists covering meaningful stories in central Illinois, please consider making a contribution.