This I Believe: Unicorns, Rainbows, Teddy Bears, and Marshmallows

Unicorns, rainbows, teddy bears, and marshmallows were words my middle school math teacher used to say. I always laughed when she said it; the phrase seemed so silly and meaningless. But it was not until years later that it began to resonate with me. My teacher would always say the phrase when she knew we were stressed about school; It was her way of trying to bring positivity into the classroom. Back then, I thought nothing of it.

Two years after I finished middle school, the phrase began to reveal its true meaning to me. That year I got a job teaching tennis at the local courts. There were many classes that I helped to teach, but I mainly taught a class for 3 to 5 year olds. I loved teaching all the classes; however, not all of my coworkers did, with nearly all of them despising teaching the littlest kids. None of them had the patience to deal with them. This forced me to step up and be the main teacher for the little kids.

As most people are aware, little kids can be angels or devils, and there is no way to know how each day will go. Some days it took all my patience to get through classes, while other days they were a breeze and flew by. It was during the tough classes that the phrase spoken by my teacher years ago truly started to take effect. I realized that my teacher was trying to get us to see the positive side of life and not just focus on the negatives that we felt in the moment. She wanted us to see the big picture, and with that silly little phrase, she was doing more than giving us a laugh, she was showing us a different way of thinking.

Ever since I came to that realization, my outlook on life changed. I stopped focusing on short-term problems and focused on the positivity of the overall situation. While some of the classes were hard to get through, many more of them were fun. More often than not, the kids and I were laughing and smiling as we played fun, little games and the classes would end with all of us out of breath and pink in the cheeks, but smiles painted each of our faces. The good outweighed the bad, and so I made the conscious effort to only focus on the happy. Even when the summer ended and school began, I continued with this mindset. I focused on doing well at school so that I could go to whatever college I wanted. No matter how hard the classes I was taking were, I focused on the positivity of the bigger picture and did not allow the challenges to bring me down.

This I Believe Illinois is NPR Illinois' annual essay program for Illinois high school seniors. An expression of where their minds are as they prepare to enter the adult world. This I Believe was started by radio journalist Edward R. Murrow in 1951 to allow anyone able to distil the guiding principles by which they lived. Special thank you to our sponsors: The Rotary Club of Springfield Sunrise, State Journal-Register, BLH Computers, KEB, and Marine Bank. 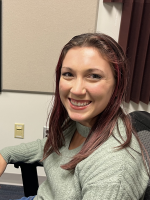