Hello, I am Madelyn Moore for the 2019 Illinois Podcamp.

The world of journalism is constantly changing, and is extremely competitive. Even within the Springfield area, there are numerous outlets competing for people’s attention. The Illinois Times has carved out a distinct place within that landscape. I had a chance to talk with the Associate Publisher of the Illinois Times and Springfield Business Journal, James Bengfort. James got a degree in marketing which he uses in his work as publisher. He loved the capital city and searched for an opportunity to return after working for the Oklahoma Gazette.

“I liked the 3 years in springfield that I had here, it is a great city, Illinois Times has a great reputation, so does the (Springfield) Business Journal. Basically, I was asked if I could come back and I said ‘sure’ .”

James spoke about the changes in the market.

“Well, love it or leave it, Facebook has changed the market alot as far as information sharing and news.”

He also spoke about the changes in politics and how it affects the workplace, especially since the newspaper revolves around the difference between news, media, and opinions.

“As Illinois changes administrations, so does the wind of advertising sometimes or , you know, the views . So,(the challenges in my line of work) do sway. Fortunately, the paper has a strong reputation. We stay fast and in an editorial direction. We don’t cow-tow to an advertiser who doesn’t like a story because they are one political affiliation or another, we just do the news and if people don’t like it, that is something they can deal with.”

James Bengfort understands that true professionalism means not letting the competition go to your head.

“Partnerships with stations like UIS NPR, I’ve always worked well with other media companies, because, what doesn’t kill you makes you stronger.”

Bengfort exclaims the difference between the Springfield Business Journal and Illinois Times, compared to other major publications.

“So, the locally owned aspect I think is what makes us stand out, fair and balanced journalism is probably the other part.”

James is an excellent publisher and a sincere role model for many people who want to dive into the journalism industry. With his astonishing career, James looks forward to many more years in the Springfield news industry. This has been Madelyn Moore, for the 2019 NPR Illinois Podcamp. 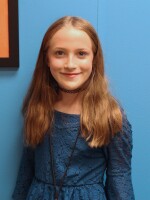 Madelyn Moore
Madelyn Moore is a sixth grader at Glenwood Intermediate School. She lives in Springfield Illinois. She loves to read and write. She loves reporting on music and current events.
See stories by Madelyn Moore
LATEST STORIES
Related Stories